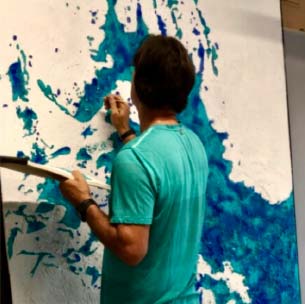 Scott Weiss began his art training as a teenager at the Bloomfield Hills Art Association outside of Detroit, Michigan, a program affiliated with the famous Cranbrook Academy of Art. In addition to his fine art training, Weiss immediately was attracted to abstract art, after studying the works of Alexander Calder and Joan Miro. In his first public showing, Weiss won “Best of Show” with his abstract rendition, “Triangles and Circles,” at the young age of just fourteen years old.

Weiss continued studying art, photography, and architecture at the Bloomfield Hills, Michigan, Andover School, and attended Michigan State University’s College of Communication Arts and Sciences, where he continued studying art and received his degree. He opened his first studio upon graduation, in downtown Atlanta on Garnette Street, in 1982. His art over the years has included a multitude of mediums, including canvas, paper, fabric, furniture, and glass.

His current work is a mixed media on large canvases, where he draws his inspiration from natural phenomenon and the juxtaposition of human experiences.

Since the age of 15, Weiss has been commissioned by hotels, restaurants, high-end furniture stores, and galleries, as well as for installations in a number of private residences throughout the United States. He is represented exclusively by Living By Design Art in Jupiter, Florida.